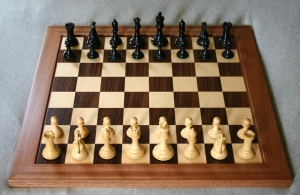 I recently just started playing chess again – my opponents mainly being my dad and brother. Last summer we ignited a near-daily ritual of playing and yesterday, when my brother suggested we play a game, I forgot how much I enjoyed it.

Clean cut war in slow motion somehow. For sport, for fun. No blood.

I don’t have a color preference. We rotate often. But it’s the strategy; It’s getting the board really dirtied up. You need to muster up enough logic to solve a Rubik’s Cube. You have all these variables and variations: “What if this? And what if that?”, “What would be a good move for him? What’s the motivation behind that move there?” It’s the competition that’s so invigorating.

I rarely win. Today I did – against my dad. My brother and I had a stalemate, though he beat me pretty good yesterday. Because after awhile fatigue starts to set in; You make stupid mistakes, get overconfident, try to carry out a plan that gets screwed up and you’re forced to improvise. It’s Life on a black and white checkered board. There are sacrifices, blunders, and victories.

I think you can analogize anything to Life. I like that; The eternity of it, the perpetual validation. Aum.

I love that scene in the first season of House of Cards where Francis plays chess with himself. As he’s such a manipulative character I find that an interesting hobby; Anticipating your opponent’s next move so it comes so natural to you. Just, wow.

I’m not like that. Even if I was manipulative, I wouldn’t have the patience to sit through that. Ha! Because at the end of the day you’re just playing against yourself and in turn, you become your own worst enemy – which I think Francis accomplishes. We’ll have to see how Season 3 pans out! No spoilers here! (I don’t think I’ve given away too much – nothing specific, anyway. Don’t worry, HOC virgins. You’re fine! Just tune in ASAP. Such a good show! We must discuss!)

On another note, here’s a hilarious scene from Frasier when he can’t beat his dad at chess: