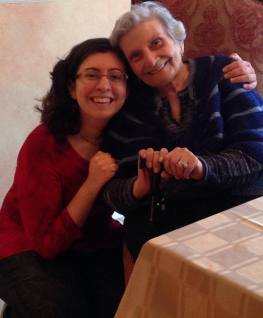 Today I lost my best friend.

She would call me her “first love” (mio primo amore, she would say), raised me alongside my parents for 24 years of my life, and never hesitated to give me absolutely everything she possibly could.

She moved into my house a little over three years ago, after suffering a heart attack in 2012. In those three years, she was in and out of the hospital for various reasons but was able to bring so much love and joy into our home.

At first, the change for her was extremely difficult. Prior to the heart attack, she lived alone, widowed for nearly 20 years, in the house she bought in the 1970s, a little less than 10 years after she immigrated to the United States from Sicily. She maintained the house on her own, cleaned and cooked, entertained with no questions asked with cookies and coffee when friends and family came over, and all in all led a very independent life only relying on rides for family events, food shopping, and doctor’s appointments.

Being dependent on others was a new concept for her and she originally despised it. It took acceptance and getting used to, but she finally began enjoy living in a house with other people again; Simple things like my brother and I chattering in the morning, the dishes clinking after dinner, the dog barking at the door, and footsteps up and down the stairs were welcome background noise. A positive contrast to so many years living alone.

My entire family was devoted to her. We converted our family room into her room complete with a bed, her recliner and dresser. Nonna straight-out refused visiting nurses and physical therapists, barely tolerating them when they did come, usually out of necessity after a long hospital stay (usually with eyerolls and words in Sicilian dialect under her breath). I, along with my mom and aunts, would help her with her daily routine: pills, breakfast, shower, getting dressed, applying creams and gels and pain patches, making sure she always had water next to her. We provided all her meals to fit her diet, did her laundry without hesitation – because of love. Because we knew how much she had sacrificed for us, how much she cared for us. It was our turn to care for her and we embraced it with open arms and open hearts.

I often had to remind her of this, as she would become increasingly frustrated, apologizing for putting us out, feeling like a burden. But I would always reassure her and joke with her: “Questa e` tua vacanza!” (This is your vacation!) Let us do it for you. Relax.

There were also moments where she would become frustrated with her condition: Having to take an overwhelming number of pills (and at times their side-effects), her bad knees and legs, sometimes frequently-occurring digestive qualms, and her faulty heart. She often wondered aloud to me why God didn’t take her sooner. I’d sit her down and talk to her about it, something I felt no one had really done with her.

“It’s not time yet. Your work here isn’t done. We still have things to learn from you, and you from us. God knows when, and it’s not now,” I’d tell her. We’d have many of these heart-to-hearts, often leaving us both in tears. At the end of the discussion I’d smile, kiss her forehead, hold her hand, and ask her if I could get her anything.

I knew how to make her laugh, how to tease her during her morning routine, things to say to make her smile.

I knew how to make her sing. We collaborated on making a playlist of all her favorite songs, songs almost forgotten that reminded her of Italy and her youth. On the day of her passing, we had accumulated 108 songs.

Being frustratingly unemployed after graduating college, caring for her daily gave my life purpose. It gave me routine. Everyday, whether drying her back after a soothing shower or baking her a cake as a treat for no occasion, caring for her and loving her was a living, breathing mediation for me; In life, death, love and most of all, compassion.

She liked roasted almonds, licorice, and the flavor of lemon. She drank espresso every morning and hated tea. She once helped me with an icing fiasco while I was trying to single-handedly make a cake for my mom’s birthday. She liked figs, kiwis, and apricots. She’d peel the skin off her grapes.

When leaving the house she made sure she was immaculate, washed, and well-dressed – even when she didn’t feel well. She used Chanel perfume.

She loved telling stories whether it was a funny anecdote from her childhood, or a true World War II story about when she had to hide in a cave with her family when bombs were being dropped, or when her father lied to German soldiers who knocked on the door and wanted to know if he had any young daughters at home to escort them for the night. (He lied and said he didn’t have any daughters, but only a son). There were more humorous stories about my grandfather: How he mistakenly corked homemade wine in glass bottles and they exploded all over the basement, how he mixed up the black paint with tar and accidentally tarred the outside cellar door, how he drove her crazy – but she seemed to have loved him all the same.

Nonna would always have a joke up her sleeve when you least expected it and was always willing to give me hugs whenever I asked (which was a lot). Her presence in my house also improved my Italian tremendously.

Were it not for her I would not exist. She immigrated to America without the intention of staying permanently. It was a leap of faith that turned out to be probably the best thing that could ever happen for her. She made sure my mom and her two sisters went to college, and got an education. They were the first in the family to accomplish that. She sacrificed for everyone, even bragging how she never took a vacation. She would work overtime and time-and-a-half at her local factory job, and on her days off would take care of the upkeep of the house – cooking, cleaning, painting, sewing, and being there for her husband and three girls.

My brother, my cousins, and I all have fond memories of Nonna babysitting us. She’d allow us to watch the TV all day, only asking that we change the channel when the Italian news came on. She’d make us pastina with bollotini (little meatballs), hand us cookies, cut us apples, give us chocolates that’d she’d have hidden in her closet near the stairs, and would sing us lullabies when we were young and maybe in need of a nap.

On holidays she was generous beyond her means, insisting we accept her gift, unrelenting with arms pushing back whatever we may be trying to return.

But she’d refuse, almost to the point of comedy.

When she moved in, Christmases were 10 times as special. Last winter she knitted me two hats and a pair of wool slippers to put over my socks.

I love and miss her so much, but am unspeakably glad she’s no longer suffering. My heart feels heavy and my chest feels hollow and my stomach hurts sometimes. Every memory I ever had with her hits me all at once, at 1000 mph.

When it came to her healthcare, my family and I played every card we could until there were no cards left to play. We explored every option, always keeping her best interests at heart, making sure she had the most optimal quality of life.

When she originally had her heart attack in 2012, the doctors predicted she would have 6 months to a year left to live. My family and I turned that into a little over 3 years.

She celebrated her 87th birthday on April 22nd and was able to attend my cousin’s Sweet 16 without incident in May – the last major family function she would ever attend.

Five minutes after she died, the windchimes in my backyard started sounding loudly for an elongated period of time. There was no wind.

Two days before her passing, I visited her and though she was incoherent I kissed her and held her hand, told her I loved her, unsure of what else to say for fear of choking up. Maybe that’s all that needed to be said.

She was very special to me. I will miss every essence of her being – her voice, her moving throughout the house, the click of her walker, and her saying my name.

She was my Nonna.

And I will always be her primo amore.

One thought on “Mia Nonna”